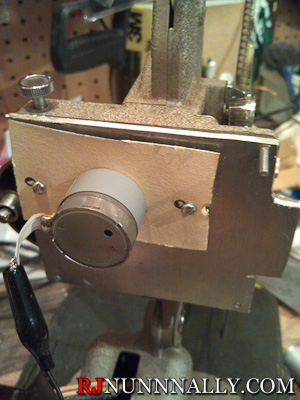 Last night saw significant progress on the telecine project. I made a new back for the projector that replaces the original motor & lamp housing, then successfully tested the new DC motor. 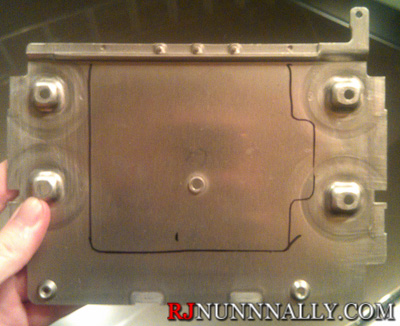 I began with what was once an ECU cover (or more accurately, a DME cover from a BMW). I made a cardboard template of the rear of the projector earlier, than transferred the outline to the cover. From there, I used a dremel to cut the outline out and drilled and tapped four 3mm x .50 holes for machine screws. 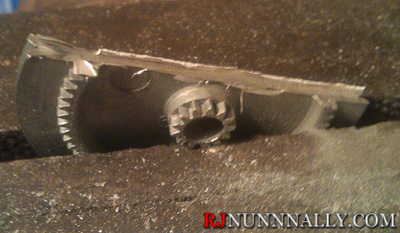 With the plate taken care of, I turned  my attention towards the drive gear. The cassette player I sourced the gears from had two identical gears with both inner and outer teeth as pictured. My plans use one of the gears to replace the original drive pulley with the outer teeth being driven. The motor uses the inner teeth of the remaining gear to engage the outer teeth of the now replaced drive pulley, but the gear must be ground down to only the center for it to clear. I used a dremel and grinder to first cut up the gear, then grind the remaining metal down until only the center remained. 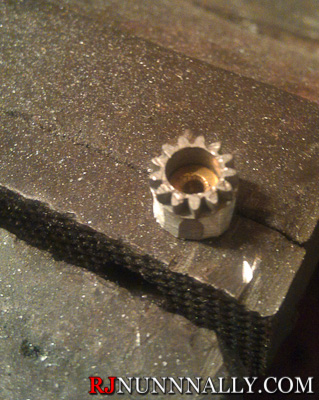 The newly ground gear was then mounted to the DC motor. A hole slightly large than the gear was drilled into the new back plate, then the motor was mounted to the back plate. A spacer had to be used for proper clearance, and the spacer also made it easier to mount the DC motor using very shallow screws. With everything mounted, I applied +12v  DC to the motor and watched the projector run!