I purchased this car for the grand total of $400 + $50 towing fee in the Summer of 2009. It arrived in all its non-running glory, but I was confident I pinned down the problem during my  pre-purchase inspection; the car cranked but had no fuel. When I listened from the fuel pumps (yes, plural) to prime, I heard nothing. The seller was convinced the fuel pump (no s) died and needed replacement, but as I knew the car had both an in-tank lift pump and inline pressure pump, I found it unlikely both had died. Further troubleshooting revealed the problem was nothing more than a failed main relay! Following some basic maintenance (timing belt, CSB, and a throttle body boot), I was on my way for about 3k happy miles. The eta delivered outstanding mileage while it was stock, up to 40 mpg in some cases.

I did not, however, buy this e30 for fuel mileage. I had visions of racing in my head, so I quickly gutted the interior, A/C, and P/S to lose any unnecessary weight. My buddy had just purchased an e46 M3 and the seller, having heard about my project, graciously donated a small T3 turbo from an old Volvo 240 to my cause. This turbo provided much needed motivation to boost the eta. I started in stages, first converting the motor to run on a home built Megasquirt 2/Extra engine management system in a fuel only implementation, then moving to full control with a wasted spark ignition, and finally adding the turbo to mix. I initially used the turbo’s factory wastegate which was set to 6 psi and put about 1200 miles at this moderate boost level with nothing more than a 666 fabrication turbo adapter, charge tubing, and a BOV. The eta was unique in that it came with oversized fuel injectors from the factory, and the moderate boost pressure just barely pushed them to 100% duty cycle (meaning the injectors were turned completely on and maxed out, like a faucet opened all the way).

Unfortunately, I was hungry for more power and upped the boost to 10 psi with the aid of a higher pressure fuel pressure regulator. The engine ran brilliantly for all of about 300 miles, but lifted the head on my drive home from UMBC, Halloween weekend 2010. Of course this was no problem, I had a replacement M20B25 already! But why go with another M20 when an M50B25 falls in your lap? Another good friend had been hit hard in his 1994 325is, hard enough to total the car. He sold the drivetrain to me for a good price and helped me swap it in, but we hit a wall when the engine failed to clear the brake booster. After trying to work around it rather than replace the booster, we gave up and the car sat until Summer. I wired the engine during the Summer of 2011 but failed to address the brakes due to lack of funding. The car again sat around until the next Summer after I secured a better paying job. This time I went all out and not only fixed the brakes with a Porsche 944 brake booster, but also purchased a Blunttech tubular turbo manifold, Five-0 750cc/min fuel injectors, TiAL 44mm wastegate, Holset HX35 turbo, AEM UEGO wideband controller & Bosch O2 sensor, and a new eBay blow-off-valve. The car was once again running, but it ran poorly and smoked a lot. After sitting for so long, the rings had frozen 🙁

I was not deterred after putting so much effort and money into the prior motorswap. I sought out another, known running M50 from a 325is and found one in a rear-ended 1992 325is. I paid $600 cash for the ’92, drove it home, and parted it out in eleven days. Then the e30 was pulled into the garage for its third heart transplant. Thankfully everything went as planned and the car is still running with the new setup several hundred miles later. Due to rust, the lack of an interior, and a deal too good to pass up, I purchased the ’91 318i as a replacement chassis and the turbo gear will soon be swapped over leaving the 325 available for purchase. 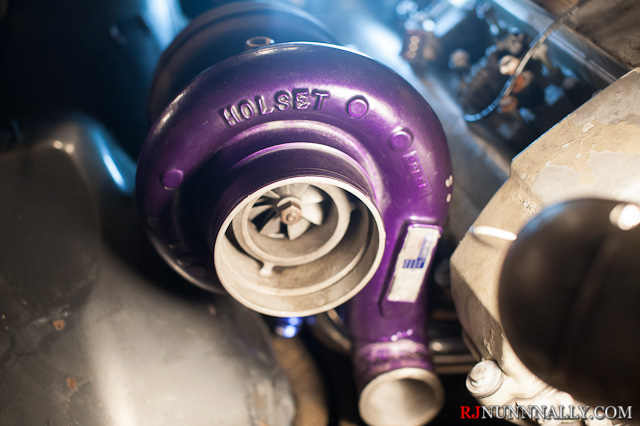 Holset HX35 in its new home

My e30s both have their power steering deleted, but the M50 from the later e36 uses a serpentine belt that drives the water pump, alternator, and p/s pump all at the same time making impossible to “just remove the belt” to prevent the p/s pump from running like on the...Read More » One of the problems with swapping in a modern 24 valve power plant into the e30 chassis is that the factory brake booster will not clear the intake manifold on BMW M5x/S5x engines. Several options are available to remedy this, including slotting or redrilling the firewall to move the factory...Read More »

Nothing too exciting, just giving it a rev Brake line replacement on the e30 The ’85 has been a Maryland car all its life which means it has seen a lot of exposure to salted, snowy roads. The brake lines are exposed under the chassis and made of rolled steel steel dipped in aluminum for...Read More »