This ’91 318i is the BMW that introduced me to the world of e30s. Originally owned my friend and then coworker, Steve, this e30 has been under the knife for far too long. Steve purchased the car in 2008 as a running, four-cylinder 318i 5-speed with aspirations for a motor swap. He originally wished to swap in a Toyota 1UZ-FE (V8 from an SC400) with a 5-speed Supra transmission, but quickly realized it would be too much work. A BMW M50 24 valve I6 power plant was chosen in lieu of the fire breathing V8. However, the M50 too proved to be troublesome and the car never again ran under his ownership. After being literally hundreds of miles: Annapolis to Harrisonburg, VA and later on to Vienna, VA, the ’91 e30 was signed over to me during the Summer of 2012 and towed once more to its final destination in Westminster, MD.

Under my ownership, the e30 will receive all the turbo goodies from my other e30 and finally see the open road following four years of heart failure. The current plan is to get the new motor running (check!), fix the brakes, build a temporary exhaust, perform a four wheel alignment, and put the car on the road for a break in and debug period. After the bugs have been worked out and I am confident the engine is in good condition, the process of swapping the turbo bits over will begin. The end goal is to have a stock-like e30 sedan with 400+ whp on tap. 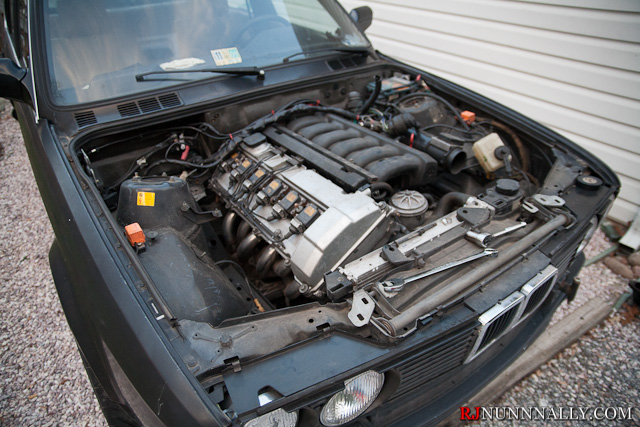 How to Vinyl Dye Your Parcel Shelf I picked up a (formerly) black parcel shelf complete with premium rear speakers for my e30 at the junkyard. Here’s how I renewed this parcel shelf with some vinyl dye and sweat. After fitting the longtube headers per this post, I had to fabricate the rest of the header back exhaust. I completely green fielded this exhaust and opted to go completely custom rather than try to adapt...Read More » Do your fuel injectors need a refresh? Here’s how to rebuild them.

First, you need to buy a rebuild kit. This will include the filters, o-rings, pintle caps, and spacers required to rebuild your injectors. I bought my kit on eBay. If you just want to replace the o-rings, you can...Read More »

My e30s both have their power steering deleted, but the M50 from the later e36 uses a serpentine belt that drives the water pump, alternator, and p/s pump all at the same time making impossible to “just remove the belt” to prevent the p/s pump from running like on the...Read More » Another problem I inherited with my ’91 318i e30 is that exhaust wasn’t finished when the M50 was swapped in. The previous owner purchased Raceland “shorty” headers intended for an e36 325i, 328i, or M3 but the recommend headers for this swap are the longtube SuperSprint header clones commonly available...Read More » My ’91 BMW 318i e30 arrived with a partially completed 24 valve M50 swap. One of the problems with the 24 valve motors is that the intake manifold does not clear the factory brake booster which leaves about three common options: